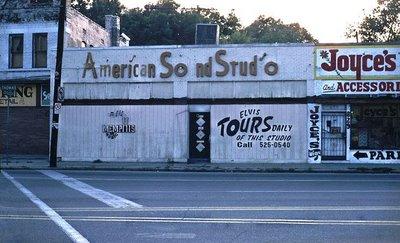 American Sound Studio was a recording studio located at 827 Thomas Street in Memphis, Tennessee. More than one hundred hit songs were recorded there between its founding 1964 and its closing in 1972, The music for these hits was played by the house band "The Memphis Boys", also known as the "827 Thomas Street Band".

Artists who recorded at American Sound Studio included Elvis Presley, Joe Tex, Wilson Pickett, Bobby Womack, Joe Simon, Merrilee Rush, Aretha Franklin, Oscar Toney Jr., Neil Diamond, Dusty Springfield, B. J. Thomas, Petula Clark, Roy Hamilton, and The Box Tops. Bobby Womack was a session guitarist at American Sound Studio and recorded his first charted hit there.
American Sound Studio was started in 1967 in North Memphis by producer Chips Moman and Don Crews. Between 1967 and 1971 approximately 120 hit songs were produced, and listed in the top 100 of Billboard, at the American Sound Studio. During one week span 25% of Billboard's top 100 not only came from the same studio but featured the same band backing a variety of artists. It was further noted that the Memphis Boys recorded 122 Top 10 records using the same rhythm team, and were also known as the “827 Thomas Street Band” after the address of the studio. American Sound Studio folded in 1972 and the building was torn down in 1989. In its place is a Family Dollar store with a County historical marker.
ONYX/American Recording East

American Sound Studios and the Memphis Boys were in high demand, and had to use other studios in Memphis, such as Royal Studios (where "Dark End of the Street" was recorded), Sounds of Memphis, Ardent Studios, National Street Studios, Lyn Lou Studios, and Fame Studios in Muscle Shoals, Alabama. By acquiring a second studio the purpose was to keep all productions in house.
In November 1968 Chips Moman and Don Crews ran a full page advertisement in Billboard to announce the acquisition and operation of both their “North” and “East” studios.

The studio at 2272 Deadrick Avenue was the first purpose-built studio in Memphis[6] designed and built as "ONYX" in 1967, and was utilized by different record companies. Steve Sholes of RCA records commissioned its construction but died in April 1968. The studio's staff included Stan Kessler, Ronnie "Angel" Stoots from the Mar-Keys, and George Klein. The first single cut there was "Mama”/“Merry Go Round" produced by Bobby Manuel. The studio, after its first year, became popular with Jerry Wexler and Tom Dowd of Atlantic Records, and Dot Records/Paramount Records.
It was purchased by Chips Moman and Don Crews in December 1968, and renamed American Recording East, known as “The Annex”. The studio was custom-designed with stereo echo chambers, and its large tracking floor made it well suited for larger productions such as horn and orchestra sessions (Presley's "Kentucky Rain" arranged by Glen Spreen, is an example). Wayne Jackson recorded there as part of the Memphis Horns, including the trumpet part on Neil Diamond's "Sweet Caroline". The studio had easy access the Memphis International Airport, and next door was the Memphis landmark John Grisanti's restaurant.
So many recordings were made at American North, and American East helped complete many of the studios productions between 1968 and ‘72. Both were fitted with similar equipment which allowed the easy transfer of tapes, and were able to operate 24/7 to handle the demand. So much more work could be done, as Moman quoted to Billboard magazine. Moman also liked to work in anonymity during these years and the East location served that purpose well.
n 1972 Moman and Crews had made arrangements for a split. Moman moved to Atlanta, then Nashville with American Sound Studios, and the studio on Thomas St. was closed. Crews restored the Deadrick location back to "ONYX". By 1975 STAX studios had closed.

From 1978 to 1988 ONYX was the studio for Allen Jones, ex-STAX engineer and producer (the Bar-Kays, Isaac Hayes, Albert King, Kwik), and the studio home for the Bar-Kays. Then in 1990 ONYX became the Easley McCain Studio under the direction of producers Doug Easley, Davis McCain and Stuart Sikes. The studio was used by acts including Alex Chilton, Tav Falco, Rufus Thomas, The White Stripes, Loretta Lynn, Wilco, and Jeff Buckley.
After the fire the studio was auctioned off by the insurance company and was bought by an out-of-state developer. After negotiating with the developer to protect this Memphis landmark the developer decided to sell, custodial power was given to Brad Dunn in 2006 to campaign to get the studio reopened. Brad was supported by his father Robert and uncle Donald "Duck" Dunn, and sought input from Chips Moman, Don and Erick Crews on preserving the historical site. A trust was set up by new owner David Gicking to preserve the studio's future. The first phase was complete in 2011 after a detailed restoration.
Brad Dunn (producer, engineer), Matt Martone and Will Gilbert (engineer) re-opened the studio in 2011 as American Recording Studios
ARS is the only physical location where any of the American Sound Studios legacy remains. It is still owned by David Gicking and Brad Dunn in 2017. American Sound Studios AKA American North on 827 Thomas street was demolished in 1989 for “urban renewal”.

Recording artists
In January 1969, Elvis Presley recorded his last number one hit "Suspicious Minds" with producer/engineer Chips Moman.[8] Around this time, American Sound Studio was at the top of its game, in the middle of a three-year span that would yield more than 100 hit records for artists that included B. J. Thomas, Neil Diamond, and Dusty Springfield.

The Memphis Boys
The Memphis Boys, American Sound Studio's House band was composed of drummer Gene Chrisman, bassists Tommy Cogbill and Mike Leech, guitarist Reggie Young, pianist Bobby Wood, and organist Bobby Emmons. They brought versatility to the studio, including Joe Tex's "Skinny Legs and All","I Gotcha"; Wilson Pickett's "I'm in Love"; Joe Simon's "Hangin' on"; Merrilee Rush's "Angel of the Morning"; Neil Diamond's "Sweet Caroline"; The Box Tops' "Cry Like a Baby"; Elvis Presley's "In the Ghetto"; and Danny O'Keefe's "Goodtime Charlie's Got the Blues". It was Tommy Cogbill's bass ride out in Dusty Springfield's hit "Son of a Preacher Man." They were also the band in flutist Herbie Mann's 1969 Jazz Rock classic Memphis Underground. In 2007, they were inducted into the Musicians Hall of Fame and Museum in Nashville, TN.

Bobby Womack
Bobby Womack worked at producer Chips Moman's American Sound Studio in Memphis, and played on recordings by Joe Tex and The Box Tops. Until this point, around 1967, he had had little success as a solo artist, but at American he began to record a string of hit singles, including 1968's "What Is This" (his first chart hit), "It's Gonna Rain", and "More Than I Can Stand". During this period he became known as a songwriter, contributing many songs to Wilson Pickett's repertoire; these include "I'm in Love" and "I'm a Midnight Mover." He also played guitar on three of Aretha Franklin's hit-making late 1960s recordings, including the Lady Soul album, and "Chain of Fools". Among his appearances as a session musician from this period are Sly & the Family Stone's 1971 album There's a Riot Goin' On, and Janis Joplin's Pearl, which features a song by Womack and Michael McClure entitled "Trust Me". In 1971, on an album with jazz guitarist Gábor Szabó, he recorded the instrumental "Breezin'", which later became a hit for George Benson.

Joe Tex
Joe Tex recorded his major hit, "Skinny Legs and All"(1967), and "I Gotcha"(1972), at American Sound Studio. "I Gotcha" was originally intended to be recorded by King Floyd, but Floyd never recorded a version of it. Instead, Tex went ahead and recorded it himself in the late 1960s, but ended up not releasing it. He decided to re-record the song in late 1971 at American Sound Studio and released it as the B-side of "A Mother's Prayer," the first single off his 1972 album that was also titled I Gotcha. Radio DJs decided to flip the single over and started playing "I Gotcha." This would result in Tex having his first major hit in five years as "I Gotcha" eventually peaked at number one on the R&B chart and number two on the Pop chart and would sell around three million copies

Elvis Presley
In January and February 1969, Elvis Presley recorded an extensive number of tracks during a period known as his comeback. One notable track, and the first to be released, was "In the Ghetto", unusual in Elvis' repertoire for its social commentary on the cycle of crime and poverty, followed by Suspicious Minds, which became a centerpiece of his live performances that would begin that year.[15] Indeed, four charting singles came from these sessions-"Suspicious Minds", "Don't Cry Daddy", "In the Ghetto", and "Kentucky Rain"—as well as two critically acclaimed albums released during 1969, From Elvis in Memphis and the studio portion of From Memphis to Vegas/From Vegas to Memphis, also the strings and horns were scored at American East Studio the annex of American Sound Studios North. Mike Leach and Glen Spreen did most of the arranging, “sweetening” the tracks at American East. Many of the unreleased songs were later issued on Back in Memphis in 1970.[16] Additional tracks recorded during the 1969 sessions would continue to appear haphazardly on assorted Elvis albums as late as 1972, including a cover version of The Beatles' "Hey Jude".

B. J. Thomas came full circle. The five-time Grammy Award winner made his name in the mid-1960s with easy listening hits like "Raindrops Keep Fallin' on My Head" recorded at American Sound Studio The song written by Hal David and Burt Bacharach for the 1969 film Butch Cassidy and the Sundance Kid, winning an Academy Award for Best Original Song. Further, David and Bacharach won Best Original Score. The version by B. J. Thomas was number one on the Billboard Hot 100 chart in the United States in January 1970 for four weeks and the first #1 single of the 1970s. It also spent seven weeks atop the U.S. adult contemporary chart.

The song was recorded in seven takes, after Bacharach expressed dissatisfaction with the first six.

The sudden changes of pop music in the mid-1960s left girl singers out of fashion. To boost her credibility as a soul artist, Dusty Springfield went to Memphis, Tennessee to record an album of pop and soul music at American Sound Studio. The LP Dusty in Memphis earned Springfield a nomination for a Grammy Award for Best Female Pop Vocal Performance in 1970 and received the Grammy Hall of Fame Award in 2001. International readers and viewers polls list the record among the one hundred greatest albums of all time.[19] The LP's standout track "Son of a Preacher Man" was an international Top 10 hit in 1969.

The Box Tops recorded Wayne Carson Thompson's "The Letter". Though under two minutes in length, it was an international hit in late 1967, reaching Billboard's number-one position and remaining there for four weeks. Produced by Dan Penn and featuring 16-year-old vocalist Alex Chilton, the single sold over four million copies and received two Grammy Awards nominations. Their single "Cry Like a Baby" was a major hit in 1968, peaking at number two on Billboard, and has been covered by such artists as the Hacienda Brothers and Kim Carnes. Some of their recordings' instrumental tracks were performed by session musicians like Reggie Young, Tommy Cogbill, Gene Chrisman, and Bobby Womack at Moman's American Sound Studio, and by future Chilton producer Terry Manning at Ardent Studios, although the actual group members performed on a number of the recordings, including their first hit "The Letter", and on all live performances.